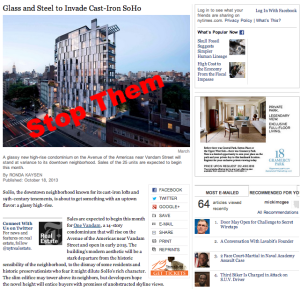 Our fight against the GLWD-QT development at 180 Sixth Avenue has been much in the news in the past year.  The New York Times covered our challenge as early as May, with a report on the fight by journalist Ronda Kaysen (5/7/13). Not long after that, in mid-July, the Times reported on the development assaults to our neighborhood in a report by John Freeman Gill (8/13/13).  And even the Times’ Real Estate section (10/20/13) — never known to frown on new luxury development — characterized the QT project as an “invasion”.  Starting in January and throughout the year, we’ve had excellent coverage from The Villager.  And, of course, the dangerous conditions at the building site were widely covered in late September, when 188 Sixth Avenue had to be evacuated due to hazardous conditions created by QT’s excavation work. We expect our legal challenge to be much in the news in 2014. Stay tuned.

ABC News was one of the first on the scene yesterday, when residents of 188 Sixth Avenue were evacuated after construction work next door on the Quinlan-Tavros luxury condominium development caused their building to shift. Within the hour reporters from all the network news channels and multiple radio and print venues were on hand. 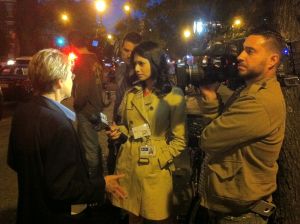 This afternoon at around 3:30, the NYC Fire Department evacuated 17 neighbors living at 188 Sixth Avenue when foundation work next door at 180 Sixth Avenue caused shifting in their 19th-century tenement-style building. The NYPD cordoned off the sidewalks as Con Edison emergency vehicles arrived to check the gas lines when the building moved consequent to hazardous foundation work being done on the adjacent lot, owned by Quinlan-Tavros. The affected building at 188 Sixth sits on the lot line with the Quinlan-Tavros luxury condominium construction site. The A, C, and E subway lines, which run along the site were affected, as trains were told to slow down to reduce vibrations.

The neighbors at 188 Sixth reported that on Tuesday one tenant arrived home and couldn’t open her front door because the doorframe had shifted significantly. She called a locksmith who came and helped her get the door open. She also reported the problem to Triton Construction, the company doing the foundation work at the 180 Sixth Avenue site, who, she reports, told her not to worry. Triton has been been underpinning the foundation of the weight bearing south wall at 188 Sixth, which caused the shift in the building. The next day, as they observed additional cracking in their walls, the tenants at 188 Sixth called 311. 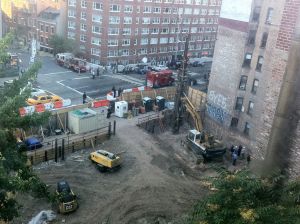 A Department of Buildings inspector visited the site and issued a stop work order.  By mid-afternoon the FDNY was called to evacuate the residents, who then waited anxiously for 5 hours as news crews arrived to report on the situation. The Red Cross was also called in to make sure that the displaced residents would be sheltered in the event the building remained uninhabitable. Around 7pm Assembymember Deborah Glick arrived at the site to ensure that her displaced constituents could get back into the building to retrieve pets, medications, and other vital items. Incumbent City Council Speaker Christine Quinn, who represents the district, said through her spokeswoman Allie Nudelman that they were “monitoring the situation.”

Ultimately, around 8:15 residents were allowed to return to their homes. DOB Inspector and structural engineer Timothy Lynch announced to a dozen news reporters that the building was safe enough to go back into service. When asked about the shifting in the building that had been severe enough to completely jam one apartment door, Inspector Lynch observed only that he had been able to open all the doors in the building that he had gone through, without directly addressing the structural shift that resulted in the tenant’s jammed door. 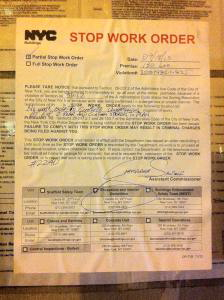 Lynch continued, noting that the building dates back to approximately 1890, that it’s an old masonry building, and that it it is “ductile.”  And for those of you who, like me, may not have “ductile” in your everyday vocabulary, it means “a solid material’s ability to deform under tensile stress.”  In other words, the building is moving under the strain of the underpinning and mechanical excavation. A partial stop-work order remains in effect.

While we are relieved that our neighbors are back in their homes tonight, we are very concerned about the ongoing stability of 188 Sixth Avenue, and overall safety on the site. Since the earliest public hearings on this proposed development — as far back as November of last year — neighbors have testified regarding their concerns about the safety of the homes at 188 Sixth Avenue.  The neighborhood remains deeply concerned.