No offense intended to our neighbors on MacDougal between Third and Bleecker, but we might want to avoid having multiple streets that are crowded with bars, pubs, clubs, and lounges. 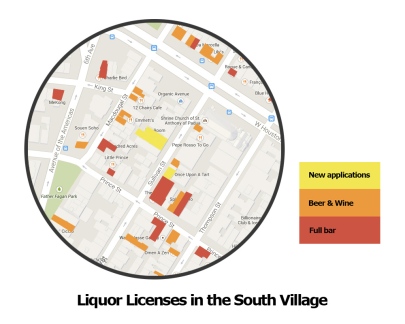 If you’re concerned that Sullivan Street between Prince and Houston is on the way to becoming the next MacDougal and Third, please take note:

If approved, this would mean four new liquor licenses in the middle of Sullivan between Prince and Houston. That’s a lot of noise and traffic on a quiet residential block. Residents are already suffering from carousing customers many nights, courtesy — or rather discourtesy — of Navy at 137 Sullivan.

Right now Sullivan Street has enough bars and restaurants to easily meet the needs of our neighborhood and the surrounding area. We don’t need more liquor licenses.

Show up, speak up, and let your CB2 representatives hear from you about the peace and quiet you value on your block.

Click on the map to see a Google map charting liquor licenses in our neighborhood.